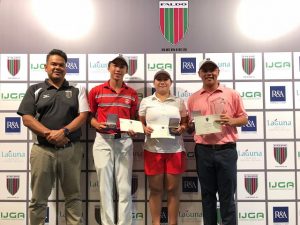 After suffering bitter disappointment and cruel misfortune in the tournament over the past four years, the national Development Squad member belatedly savoured success.

With a closing even-par 72 for a three-round total of six-under 210 at the National Service Resort & Country Club’s (NSRCC) Kranji Sanctuary Golf Course, scratch-handicapper Tan trumped his rivals in the sixth leg of the 2018-19 Faldo Series Asia season.

Given his past travails in the Faldo Series Singapore Championship, Tan, who turns 18 on Sunday, had every reason to celebrate.

In 2014, he led the way in the Singapore qualifier at Jurong Country Club with nine holes remaining before stumbling with an inward 42 that saw him drop to third.

A year later, Tan entered the event at Raffles Country Club’s Palm Course as one of the pre-tournament favourites only to come unstuck on the opening day when he ran up an 85 which included a nine at the par-three 12th hole.

Ill-luck struck again in 2016 when he was forced to withdraw on the eve of the championship after dislocating a shoulder.

Tan’s attempts to set the record straight were scuppered again last year when he suffered the ignominy of failing to make it through to the final round after posting scores of 77 and 85.

Finally, however, it all came right for Tan at the Gary Player-designed Kranji Sanctuary course this week. An opening four-under 68 raised his spirits and was followed by a 70 that saw him claim a share of the 36-hole lead with Justin Kuk.

Although Kuk edged ahead by one stroke after the front nine, it was Tan’s resolve that proved stronger, overhauling his fellow Development Squad member and holding on for his first triumph since the Singapore Island Country Club Junior Invitational at the end of 2017.

Tan will now spearhead the Singapore challenge at the 13th Faldo Series Asia Grand Final at Laguna Lăng Cô in Danang, Vietnam, to be hosted by Sir Nick Faldo in March, 2019.

“Congratulations to Tommy,” said six-time Major champion Faldo. “After all he’s been through, it’s great to see him finally qualify for the Faldo Series Asia Grand Final.”

Joining Tan in Vietnam will be Sean Lee and Wong Yen Ting.

Lee signed off with a brilliant bogey-free, seven-under-par 65 for the best round of the week to finish no fewer than 15 strokes in front of his closest challengers in the Boys’ Under-16 Division.

Wong was a model of consistency, running up only six bogeys en route to three sub-par rounds (71-69-71).

A fortnight after narrowly defeating Chua in a gripping finale to the Singapore National Amateur Championship, Loh had to settle for second place among the girls.

The article "Perseverance Pays Off for Teenager Tan" was originally published on https://www.agif.asia/2018/09/perseverance-pays-off-fort-teenager-tan/

HBO’s ‘John McCain: For Whom the Bell Tolls’ is as candid as the maverick himself 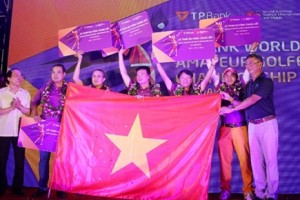 Golfers to compete in world championship for amateurs