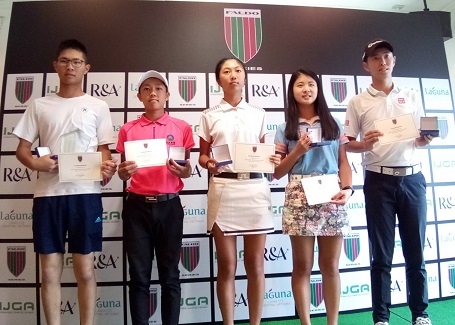 Taipei, Chinese Taipei: For the second time in less than a month, two rising golf stars from Chinese Taipei have gone head-to-head in a sudden-death play-off.

It was in late March that Chang Hsin-chiao was crowned champion at the 13th Faldo Series Asia Grand Final after edging out Chen Ting-yu on the second additional hole at Vietnam’s award-winning, Faldo Design Laguna Lăng Cô course.

Fast forward to the second week of April and extra time was required once more at the Faldo Series Chinese Taipei Championship, the opening event on the 2019-20 Faldo Series Asia calendar.

This time the protagonists in the 54-hole R&A World Amateur Golf Ranking event that attracted a 50-strong field were 16-year-old Hsu Kai-chun and Fan Yang-chia, three years his senior.

Both posted three-day totals of four-over-par 220 at the Tsai Hsin Elite Golf Club to top the standings in their respective age group categories. In so doing, they booked their passages to the 14th Faldo Series Asia Grand Final, to be hosted by Sir Nick Faldo in March, 2020.

However, in order to determine an overall winner, the duo returned to the par-three 18th. Both made their pars at the first time of asking. At the second attempt, it was Hsu who prevailed, another par proving good enough with Fan running-up a bogey-four.

Speaking from Augusta National where he’s a lead television commentator at this week’s US Masters, six-time Major champion Faldo said: “I hope we see a similarly exciting finish this weekend in America as you had in the Faldo Series Chinese Taipei Championship!

“To have players from Chinese Taipei win three of our five Grand Final age group categories last month in Vietnam was an outstanding achievement. The qualifiers from the first event on our schedule for our 14th year in Asia will have a tough act to follow.”

Winner of two Junior World Championship China qualifiers this year, Hsu appeared well set for another success when he took a three-stroke lead into the final round with Fan five shots off the pace in fifth place.

The margin between the duo was still five with nine holes remaining. But while Fan negotiated the back-nine in one-under 34 and signed off with a 71, Hsu stumbled with a double-bogey seven at the long 10th and dropped further shots at 11 and 15 to come back in 39 for a 76.

Aside from their battle for overall honours, Hsu and Fan also had to fend off challengers in their closely-contested age group segments.

In the Boys’ Under-21s, Fan pipped Wu Yao-wei by one shot while Hsu’s margin of victory in the Boys’ Under-18s was equally slim with Yeh Chia-yin and Luo Zhen-yuan both ending one shot shy. With a second-round five-under-par 67, Luo had the distinction of firing the best 18-hole score of the tournament.

Golfers to challenge at World Masters in Da Nang 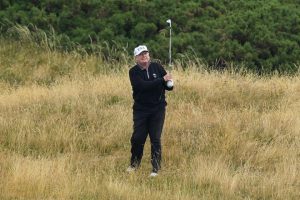 Trump says his Scottish golf course is good for America&#39;s relationship with the U.K.