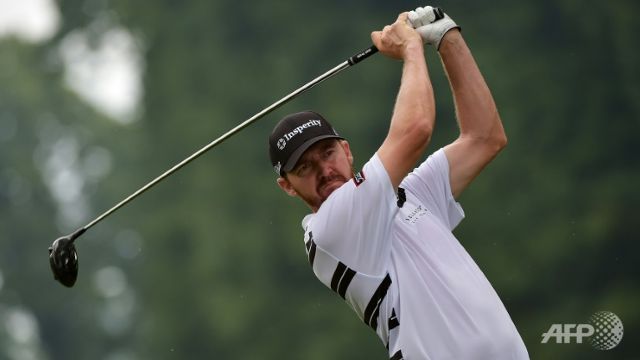 Jimmy Walker of the United States plays his shot from the sixth tee during the continuation of the weather delayed third round of the 2016 PGA Championship. (AFP/Drew Hallowell)

Walker, seeking a wire-to-wire victory and his first major title, fired a two-under par 68 in Sunday morning’s third round at Baltusrol, shaking off three bogeys in the first eight holes with four back-nine birdies, the last a tap-in at the par-5 18th.

“Just started feeling more comfortable with the golf swing,” Walker said after two bogeys in the first five holes. “Just said ‘Trust it,’ on the swing and kept the pedal going. I feel good.”

The 37-year-old American, who missed the cut in three of his past four major starts, finished 54 holes at 11-under par 199 to lead Day by one stroke after the Australian fired a bogey-free 67 in his third round.

“It’s exciting to be in this position,” Day said between rounds. “I’m looking forward to the challenge of going out there and trying to win my second major. It would be nice to go back to back but I’m really trying to just put one foot in front of the other.”

Day sank a stunning 74-foot birdie at the par-4 sixth, then added a five-footer at the par-3 ninth and a tap-in birdie at 18. 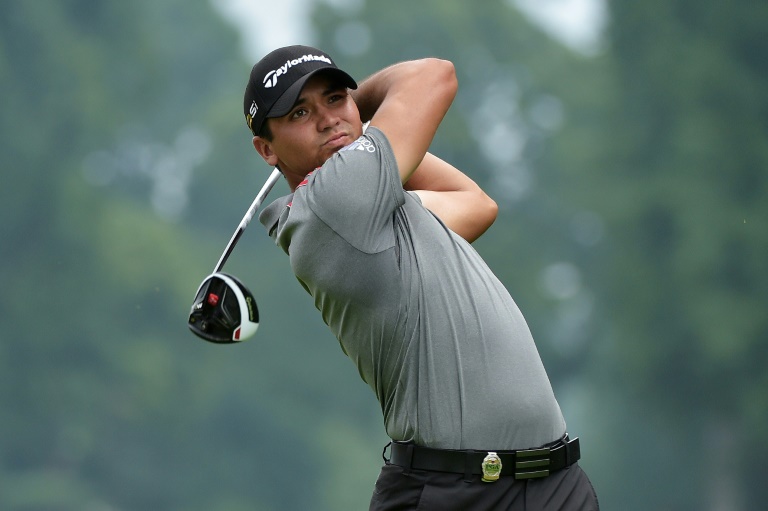 Jason Day of Australia plays his shot from the sixth tee during the continuation of the weather delayed third round of the 2016 PGA Championship. (AFP/Drew Hallowell)

“I played pretty good, gave myself some opportunities to shoot a low one but didn’t really take them,” Day said.

Downpours pushed the week’s rainfall total at Baltusrol beyond four inches, softening the greens and so saturating the 7,428-yard layout that officials used preferred lies, or “lift, clean and place” rules, for the last round, believed to be an unprecedented move in major golf history.

“It’s certainly a difficult decision,” PGA of America chief championships officer Kerry Haigh said. “We just felt for the fair play of a major championship we needed to play preferred lies in the final round.”

Players could remove mud in low-mowed areas, speeding play to boost hopes of a Sunday finish with a stormy forecast, what Haigh called, “the right thing to do to showcase the best players in the world.”

Groups kept their third-round pairings for the last round in another time-saving bid.

At stake is the Wanamaker Trophy and a winner’s prize of US$1.8 million (€1.6 million) from a US$10 million purse.

Day began the week fighting fatigue and illness, having never played the 7,428-yard layout until a practice round on the eve of the event.

“I played some really good golf,” Day said. “To be honest I have no idea (how). It wasn’t the greatest preparation, but once again the expectations came down and that kind of freed me up.”

Stenson, who won his first major title two weeks ago at Royal Troon, fired his third consecutive 67 to share third on nine under American Brooks Koepka and two players not among the late starters – South African Branden Grace, nine under through 10 holes, and American William McGirt, nine under after five holes.

Henrik Stenson of Sweden plays his shot from the third tee during the continuation of the weather delayed third round of the 2016 PGA Championship. (AFP/Andrew Redington)

“It was a bit of a struggle for me to gather my rhythm,” Stenson said. “I just hope I can pick up some timing in my long game.”

Koepka fired a bogey-free 66 to charge into the hunt. “I played pretty well,” Koepka said. “I drove the ball in the fairway. That’s key. Every time I was in the rough I had a good lie. Those are the kind of breaks you need.”

Koepka missed the British Open with a torn right ankle ligament that he rehabilitated until last week and wondered as late as Tuesday if he would play at Baltusrol. “I’ve got it taped up. It feels pretty good right now,” Koepka said. “The real test will be walking 36.”

The article "Day, Stenson chase Walker in last round of soggy PGA" was originally published on https://www.talkvietnam.com/2016/08/day-stenson-chase-walker-in-last-round-of-soggy-pga/ 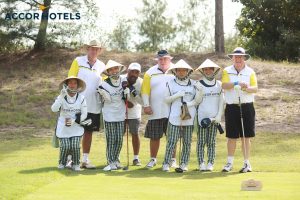 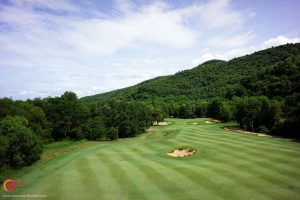