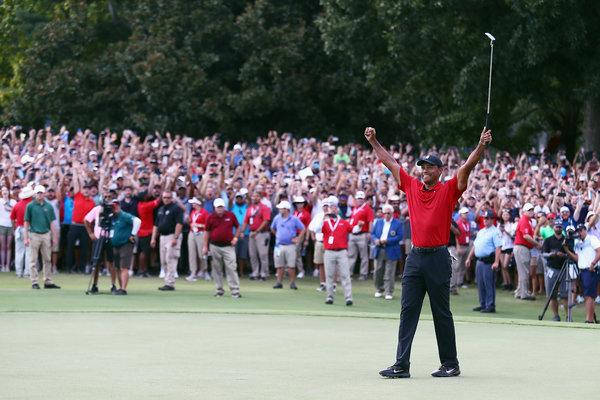 ATLANTA — Tiger Woods hit his tee shot at No. 18 early Sunday evening and started walking down the fairway when things became a little bit unhinged behind him. Fans, coming from everywhere, swarmed after one of the greatest golfers in history and one who was about to cap an improbable comeback at the age of 42.

There was no controlling this crowd at the Tour Championship, not with Woods marching toward his first victory in five years. A marshal had been holding a rope behind Woods to keep the crowd back, but he dropped it and was nearly trampled as the crowd surged forward. Suddenly, there were several thousand fans bouncing with joy right behind Woods. “Tiger! Tiger! Tiger!” they chanted.

Woods then hit his second shot on the 18th and walked toward the green. The throng started its march as well. It was nothing less than a spectacle. The revelers, some holding beer bottles and many holding their phones aloft to take pictures, understood this was not a moment to miss. They then circled the green at the 18th hole of East Lake Golf Club en masse and erupted again when Woods finished off his two-shot victory with a tap-in for par.

Golf’s public persona took a turn toward the delirious on Sunday as the sport celebrated the return of its biggest star.

All afternoon, there were chants on the course of “Let’s go, Tiger.” It was, in effect, a ballad of redemption, the man felled at first by his own flaws and later by repeated injuries, being welcomed back with open arms. It filled the fairways.

One man, standing on the first tee as Woods prepared to begin his final round with a three-stroke lead, said matter-of-factly, “I’m going to be like a little kid out here screaming for him.”

Woods proceeded to birdie the first hole, and the first “Tiger” roar went up. By the fourth hole, the crowd was standing five rows deep around the green when he putted.

Woods’s triumphant round on Sunday also allowed some fans on hand to turn to their children and say, “See, this is the guy I have been telling you about.”

“It’s an awesome feeling to see him and have mine out here with me to see him,” said Monete Batts of Grayson, Ga. His sons, Prentice, 14, and Amari, 10, were sitting on the grass along the eighth fairway.

Jerry Freeman was standing along the eighth fairway with his 13-year-old son, Jerry Jr.

“People are rooting for him,” Freeman said. “It’s an American story of a comeback. He’s earning his way back. It feels like the heyday of Tiger Woods out here today.”

Jonathan Leonard was standing with the Freemans. He did not care much about golf when he was younger, but he latched on to the game 20 years ago when Woods was starting to dominate.

“Think about how many people are playing golf because of him,” Leonard said. “I’m playing because of him. I’m glad he’s back. This is good for golf.”

Kevin Byrne of Dunwoody, Ga., looked around at the crowd on the seventh green and said, “The Tiger effect is real.”

Fans kept coming and coming as Woods progressed through his round. David Provancha, a marshal, watched a wave of people follow Woods from the third green to the fourth tee. “It’s the biggest crowd I’ve seen in the 10 years I’ve been here,” he said.

The fervor for Woods on Sunday actually started when he walked out to the driving range just after 1 p.m. to get ready for his round. Already, the crowd was four deep just to see Woods hit practice shots.

And as his final round progressed, you didn’t so much see Woods as hear him. Or more accurately, you heard the cheers and chants. While marshals on one tee were asking for quiet, several hundred yards away fans were roaring for Woods on the hole behind. There was no quiet.

Some fans said Woods seemed easier to identify with now than when he was younger and utterly dominant on the golf course. All his struggles on the course and off have made him more human, they said, and ultimately more sympathetic despite the numerous mistakes he has made.

“We are all flawed,” said one fan, Sheila McDaniel of Snellville, Ga. “Not just him, all of us.”

“It seemed like he always chasing the next big win and was never relaxed playing golf,” said another fan, Brenda Stultz of Lawrenceville, Ga., as she waited for Woods to tee off on the first hole.

But on Sunday, he was composed enough to hold on to his sizable lead and win the tournament, to the delight of Stultz, McDaniel and the rest of the throng. Woods was back. By the 18th hole, everyone was right along there with him.

A version of this article appears in print on , on Page D1 of the New York edition with the headline: A Roar 1,876 Days in the Making. Order Reprints | Today’s Paper | Subscribe

The article "A Cast of Thousands Joins Tiger Woods on His Victory March" was originally published on https://www.nytimes.com/2018/09/23/sports/golf/tiger-woods-golf-victory.html?partner=rss&emc=rss 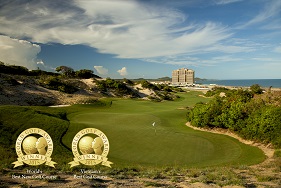 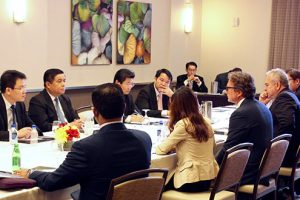 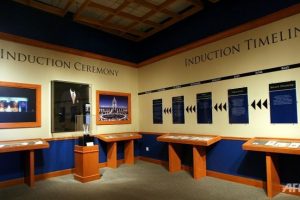