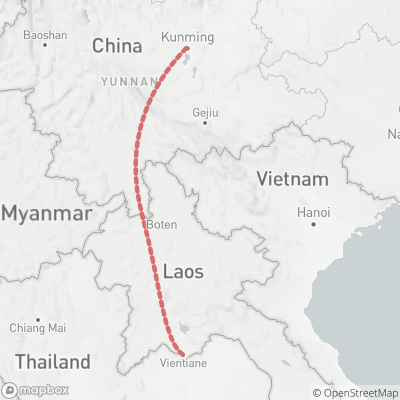 Standing at the bus station in Luang Namtha, the biggest town in northern Laos, travellers wanting to get south to the capital Vientiane face the prospect of a punishing 18-hour journey – and that’s on a good day.

China is in the process of changing this. It started construction of a new high-speed railway in late 2016 that is set for completion at the end of 2021. By then a 414-kilometre section of track will snake from Boten, on the China border, all the way down to Vientiane, on the Thai border. The new train will cut the journey to just three hours.

The USD 6 billion railway is another part of China’s expansive Belt and Road Initiative, a series of mostly Chinese-financed infrastructure projects around the world receiving direct investment and loans. In keeping with the initiative’s aim of promoting connectivity, the China-Laos railway will also connect south to lines in Thailand, Malaysia and Singapore.

The Laos government hopes the passenger and freight railway will boost tourism and trade and bring prosperity to its seven million citizens. Given the country’s mountainous geography, the railway is a mighty engineering challenge: only 38% of it will run along the ground, with the rest crossing 170 bridges and passing through 72 tunnels.

Like all large-scale infrastructure projects, the railway is expected to have major impacts on the environment, and there are already early signs of problems. At the beginning of November 2018, locals at Vang Vieng in central Laos noticed a blackish liquid mixed with the usually crystal-clear waters of the Song River. They managed to trace the source to drilling at the railway site.

On the outskirts of Vientiane, the final stop on the China-Laos railway, sits That Luang Marsh, a biodiverse wetland of 20 square kilometres. It was designated a special economic zone in late 2017. Since then shopping malls, offices, schools and homes have started rising, financed in part by Chinese money.

Laos is a developing country and many of its citizens welcome major infrastructure improvements. But what longer-term change will the high-speed railway bring to their country and the rest of Southeast Asia? With the project now more than 20% complete, photographer Surya Chuen has made the journey from Boten to Vientiane, stopping at several of the 32 new train station sites, and many rural areas in between.

The cost of the project is being met by the Laos China Railway Company, owned 30% by Laos and 70% by China. Laos is committed to paying USD 720 million of its share in the next five years, with USD 250 million coming out of the national budget and USD 470 million being borrowed from the Exim Bank of China (at 2.3% interest).

Last year, Laos’ public debt reached 65% of gross domestic product, up from 61% in 2017, partly because of increased borrowing from Chinese banks. The International Monetary Fund is concerned about the figure because Laos’ silver and copper mines are reaching exhaustion, and the country has a very low tax base.

While the railway may be a crucial development boost to Laos, it will also be difficult for the country to pay back its loans.

At the beginning of the project, Bounchanh Sinthavong, Laos’ Minister of Public Works and Transport, declared: “Once completed, the railway will benefit Laotians of all ethnic groups, facilitate and reduce costs of transportation, and stimulate the development of agricultural and industrial sectors, tourism, investment and trade.”

As their small nation moves from being land locked to land linked, the people of Laos wait to see if this is so. 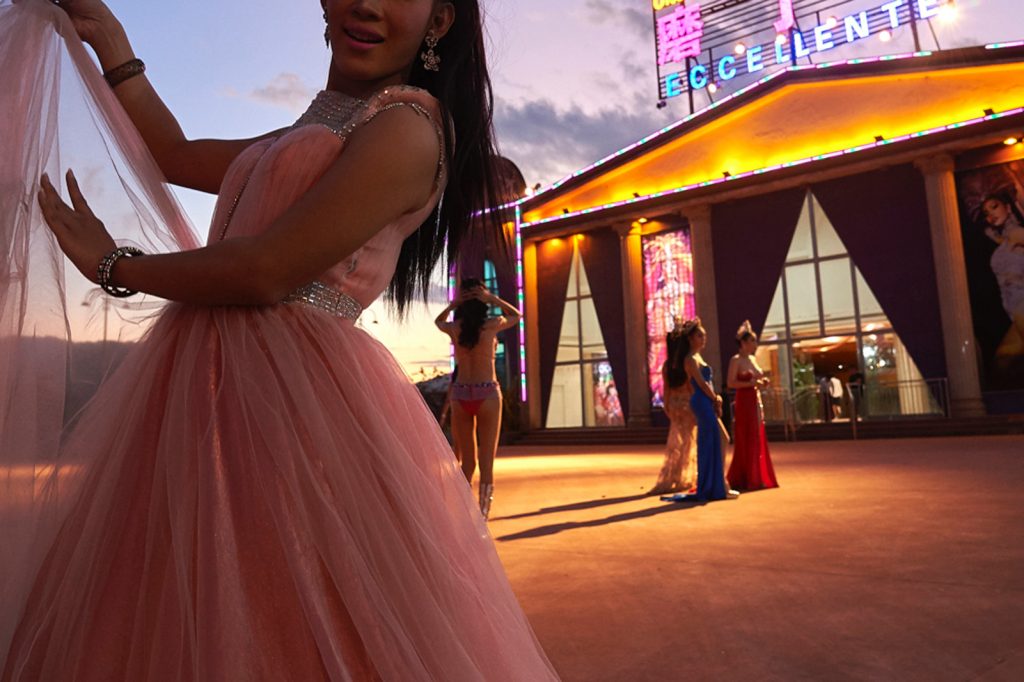 The influx of cash is reviving Boten, where the high-speed railway crosses from China into Laos. Construction has begun on four-star hotels, casinos, shops, a golf course and other entertainment venues to attract wealthy Chinese tourists. 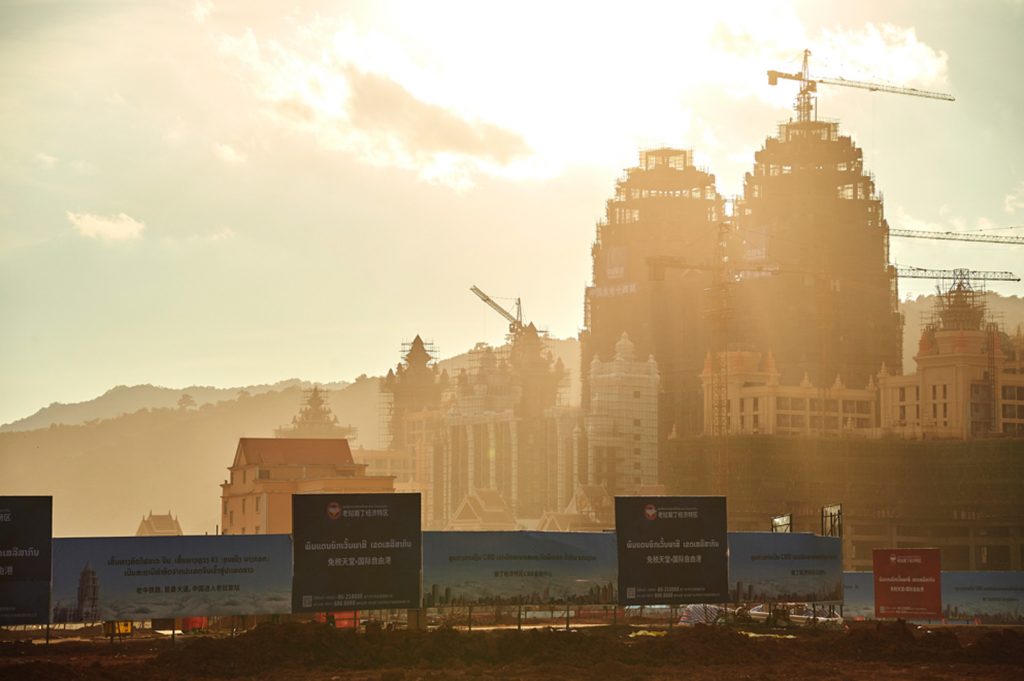 Dust from construction work blows across Boten. Not so far from the town, new car parks and warehouses are also appearing. China wants to transform the town into a major hub for transport and goods distribution. 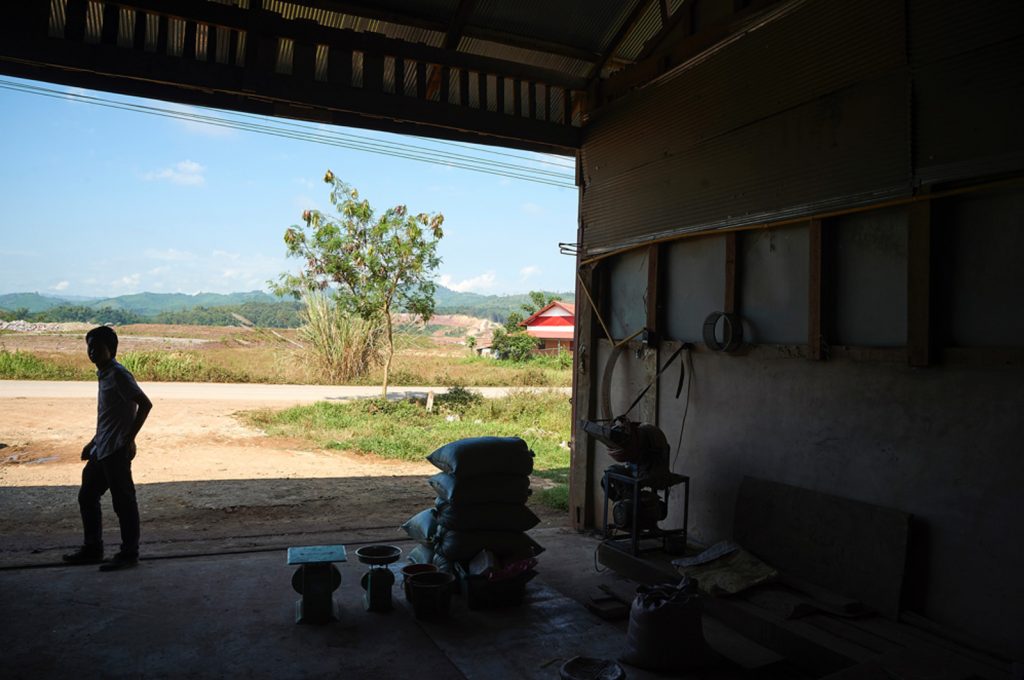 A small rice mill in Muong Xay, northern Laos, will soon be demolished to make way for a major train station. The mill owner says he doesn’t mind giving up his land as long as he’s properly compensated. Over 4,000 families will lose their land to the railway, according to government figures. Their total compensation is set to reach US$250 million. A specific figure is yet to be fixed for many. The land has nevertheless been handed over for Chinese companies to build on. 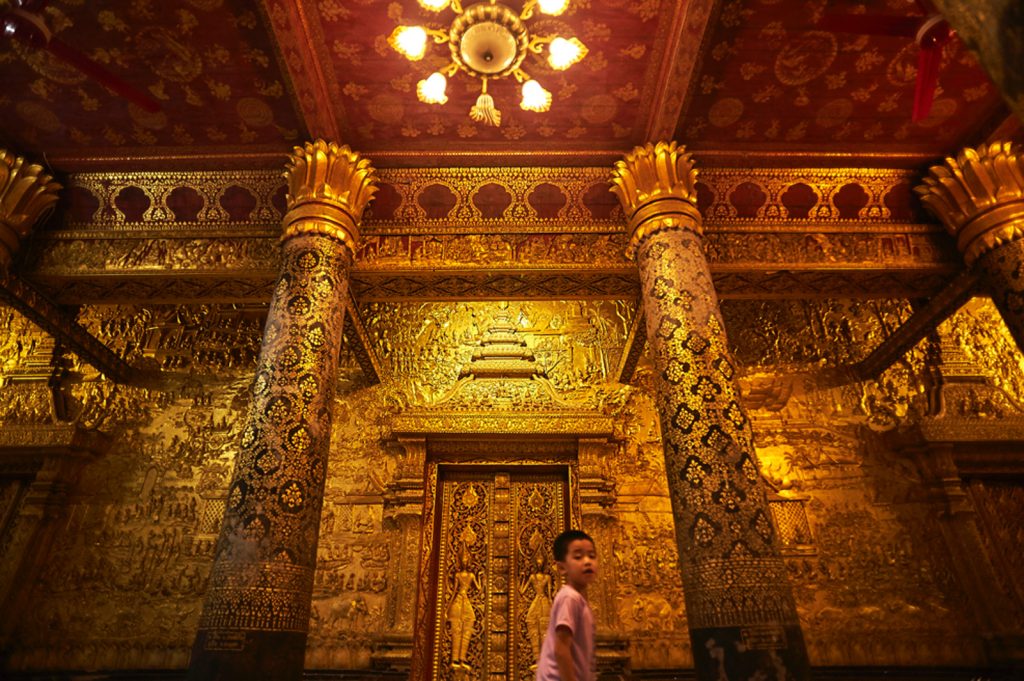 Luang Prabang, in central Laos, has seen an increasing number of Chinese tourists in recent years. The area is a world heritage site and authorities are expecting a lot more tourists once the railway is ready. As well as a new train station, the area around Luang Prabang may be developed commercially, free from UNESCO restrictions. 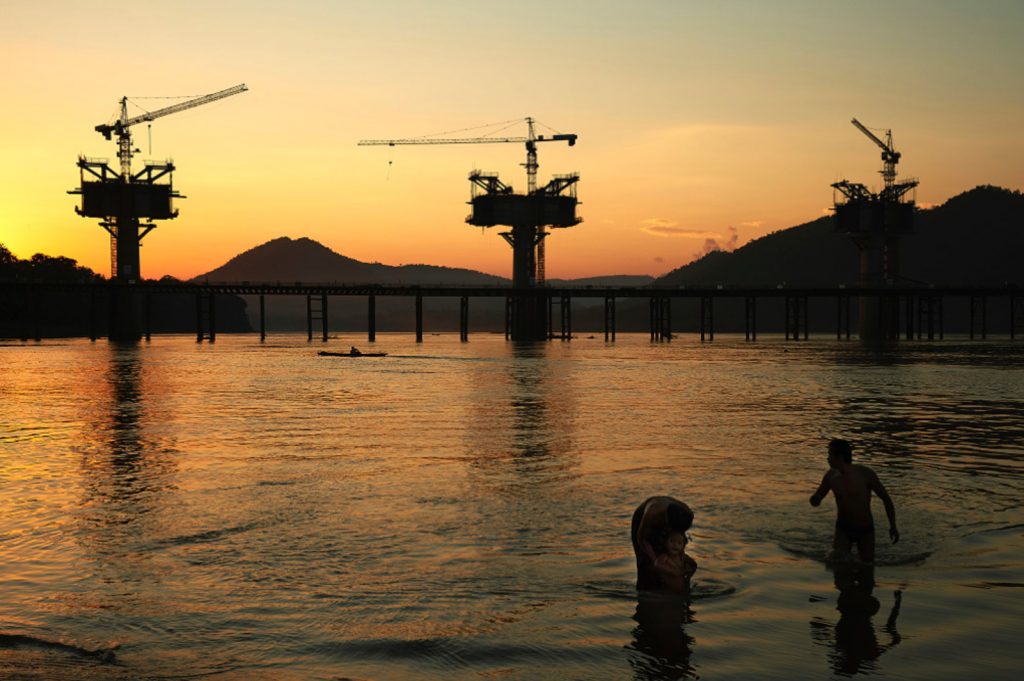 A family bathes in the Mekong, close to Luang Prabang and in front of the railway. Several shops and restaurants in the city are now Chinese-run, with Laotians having rented their properties and moved out. 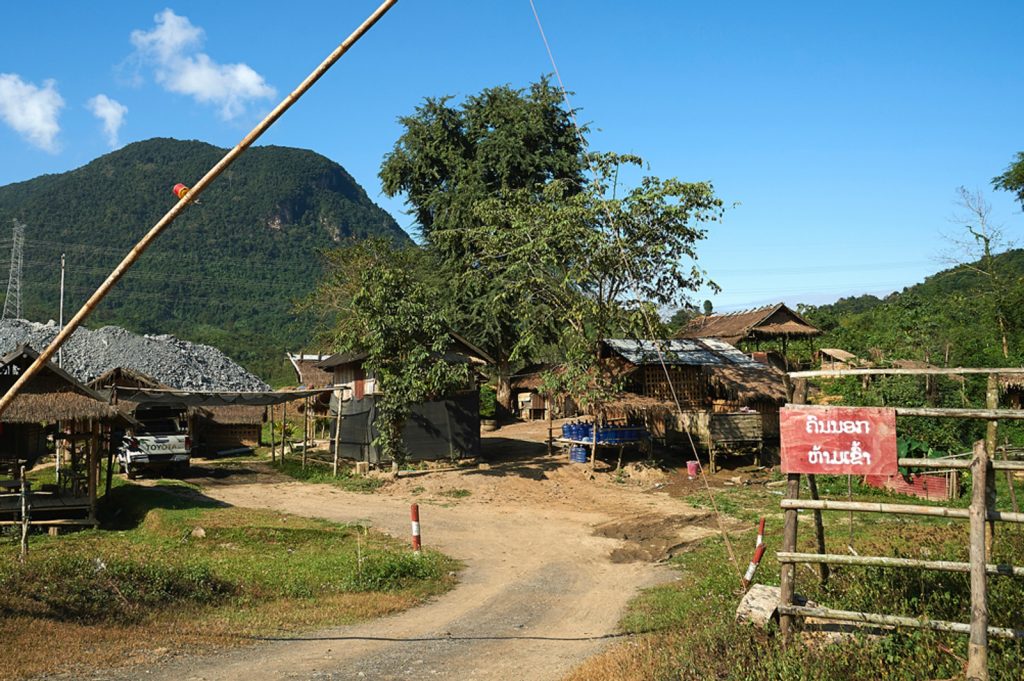 A bomb disposal unit camped near the Luang Prabang train station site. The unit is clearing mines and other explosives planted in remote parts of the country during the Vietnam War (1955-75). 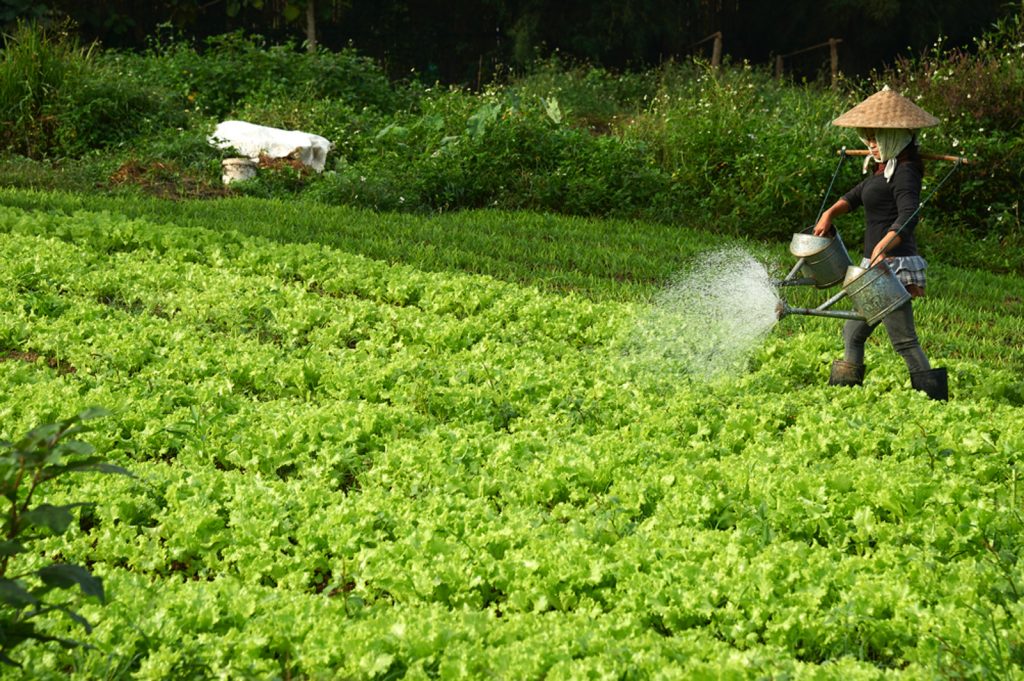 Luang Prabang residents have rights reserved by the local government to grow vegetables for Chinese workers, who have flooded the city to construct the railway. 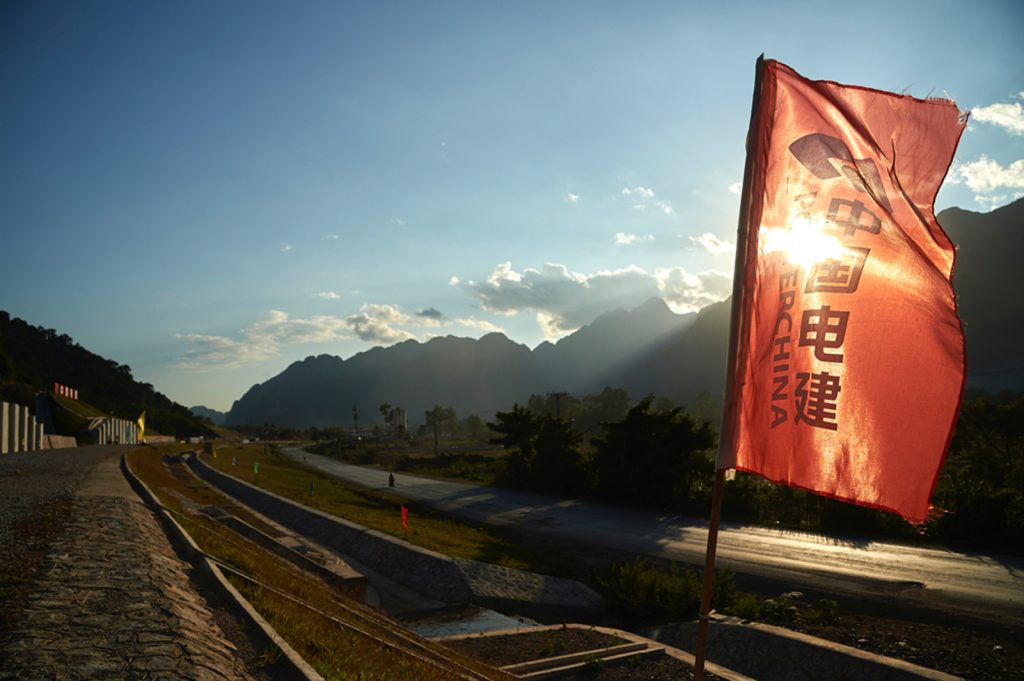 From ancient Luang Prabang the railway runs down to Vang Vieng, a popular haunt for adventurous Westerners. More and more Chinese are beginning to venture here too, with Chinese businesses following suit. 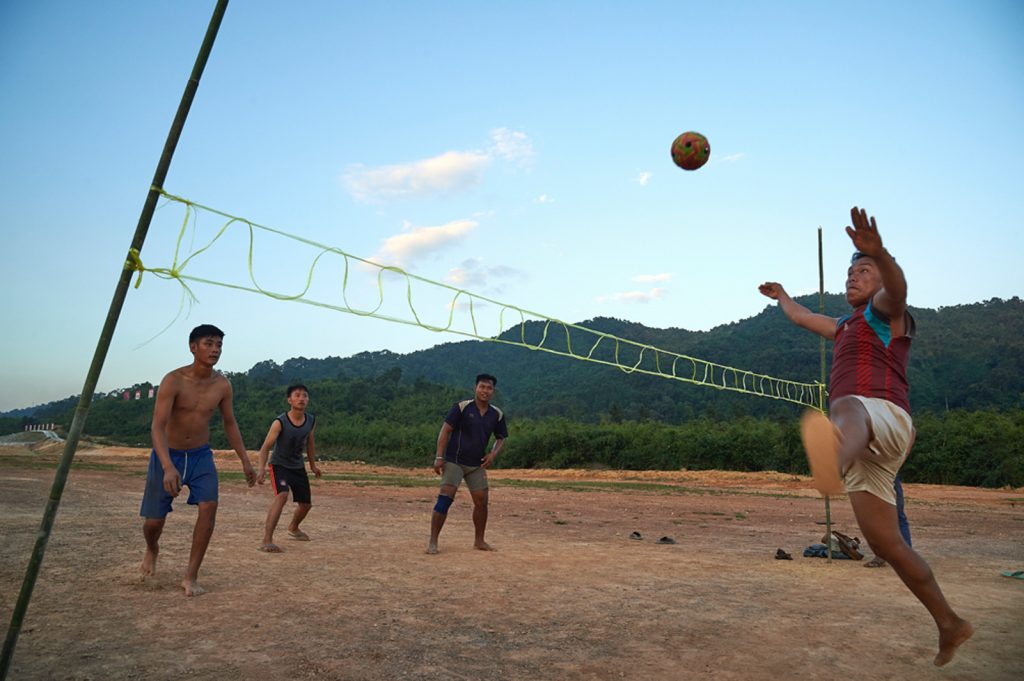 After a hard day’s work, Laotian labourers play a game of sepak takraw (ratten ball) near the Vang Vieng station site. The promise to hire 7,000 Laotians has not been kept. Only around 2,000 have been hired, according to the Labour and Social Welfare Ministry, and most of these are drivers. Meanwhile, up to 19,000 Chinese are employed on the project. 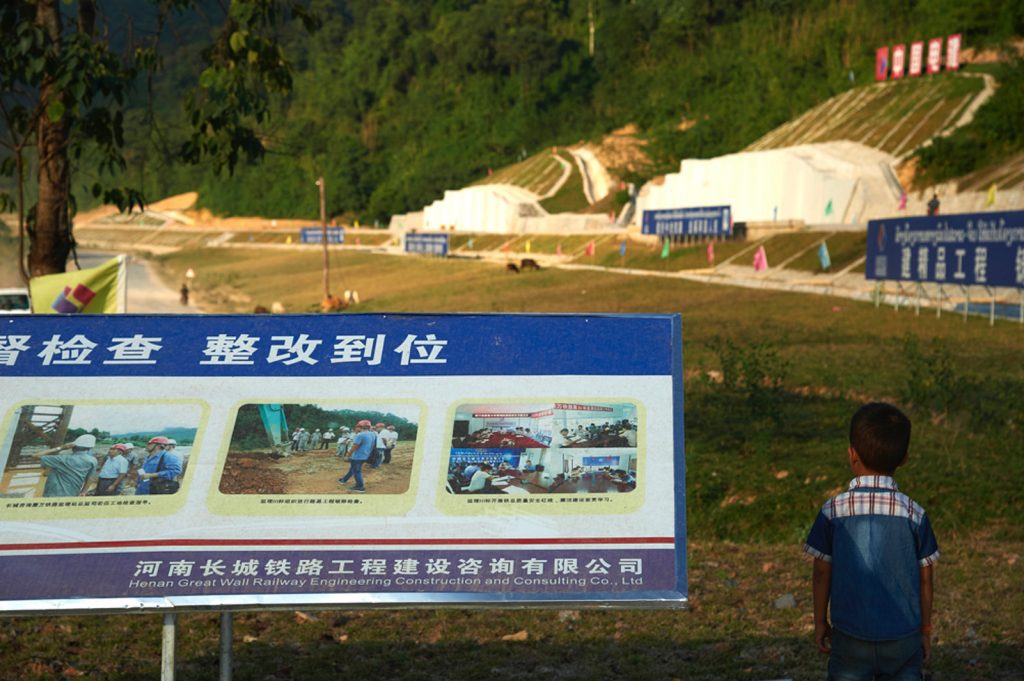 A sign prohibits entry to a nearly complete section of the railway, just north of Vang Vieng. Locals stubbornly continue to let their children play and their cows graze in the area. 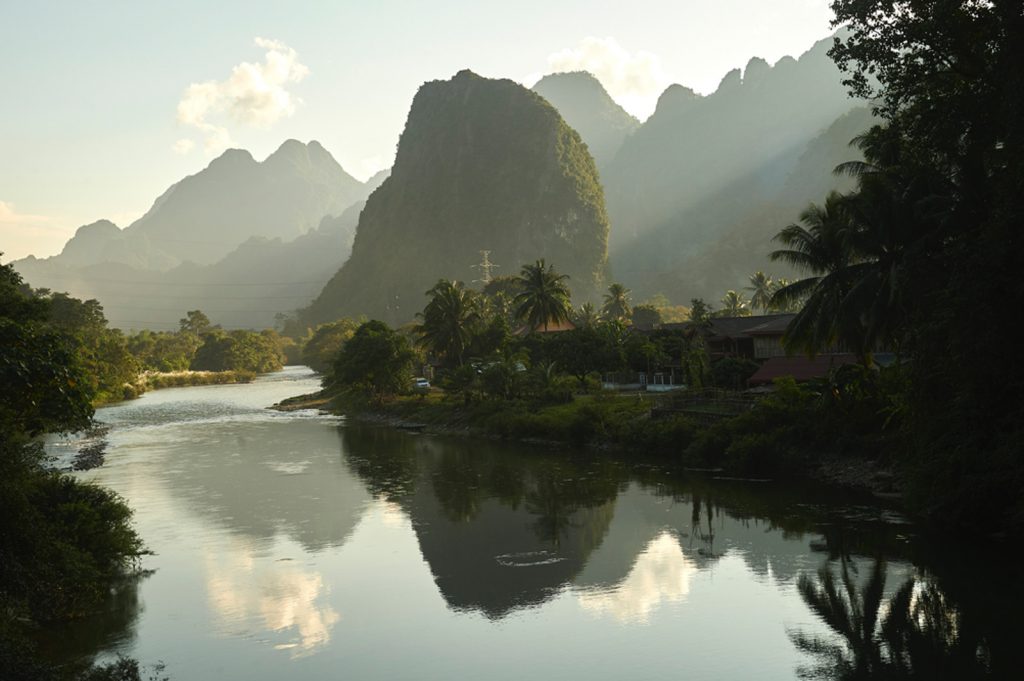 Where the Song River runs through Vang Vieng, locals noticed pollution from the railway site in its previously transparent waters. After they protested, officials ordered the waste to be diverted away from the Song. 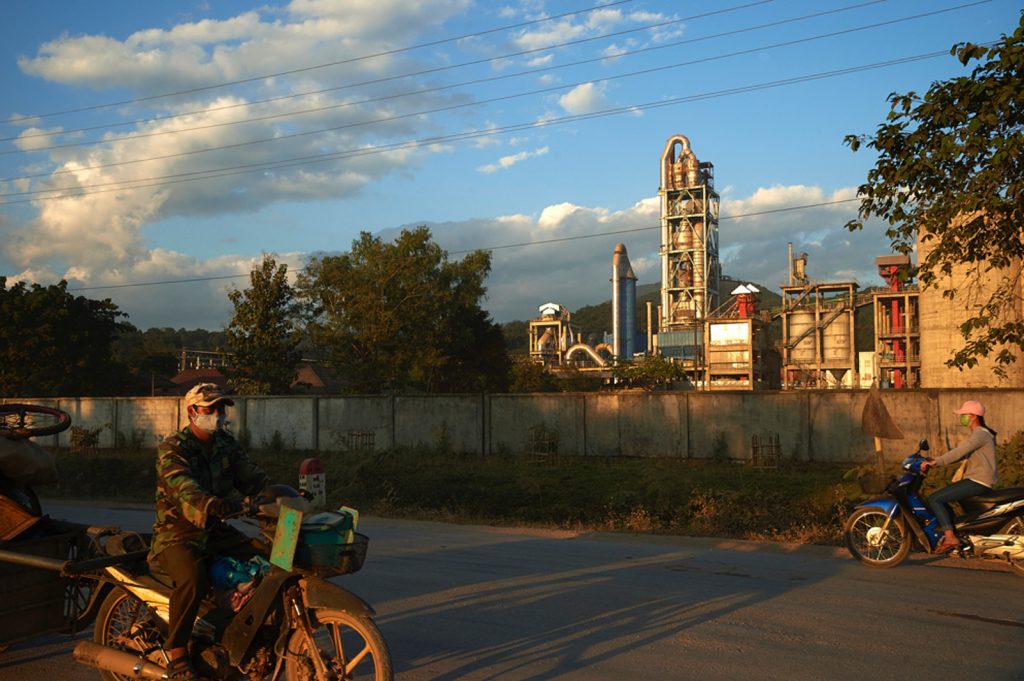 The Vang Vieng cement factory is the largest serving the railway project, with a capacity of 230,000 tonnes per year. 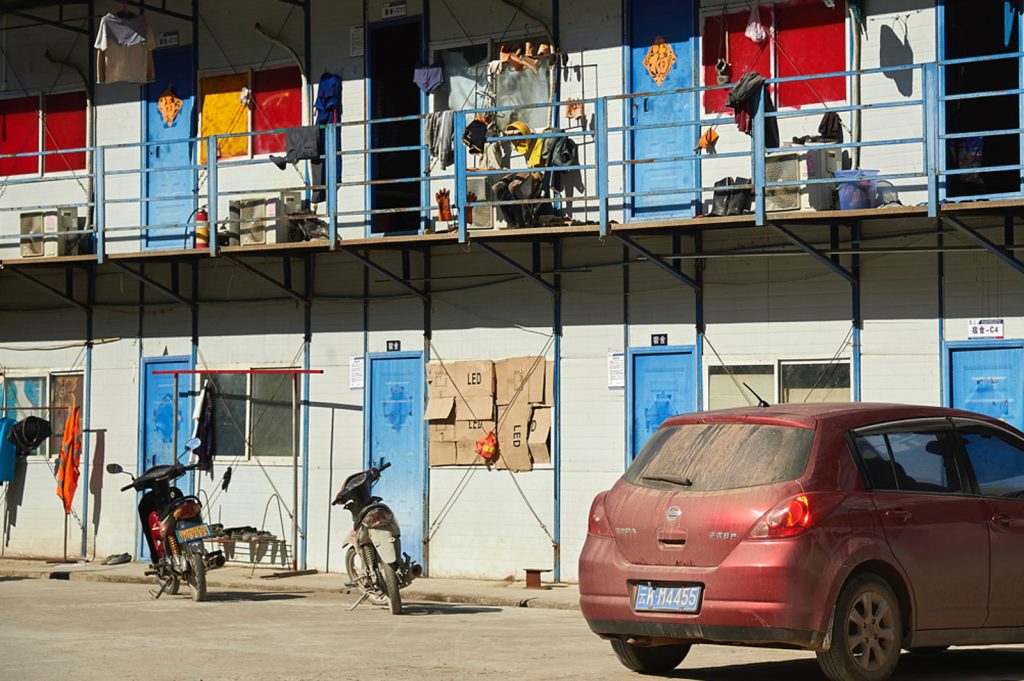 Homes for Chinese construction workers have sprung up everywhere along the railway – whether in towns, mountains or isolated forests. The influx of Chinese workers has prompted some local concern. 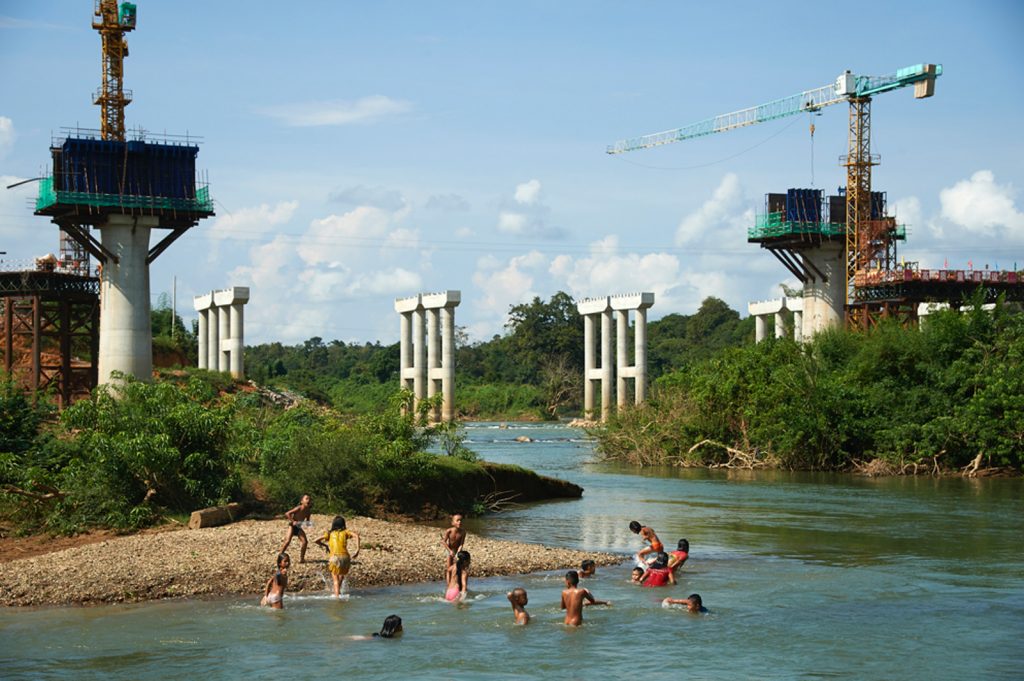 Children play by the Nam Like River bridge in Vientiane province. Here the trains will roll down from the mountains into the plains and speed up from 160 to 200 kilometres per hour. 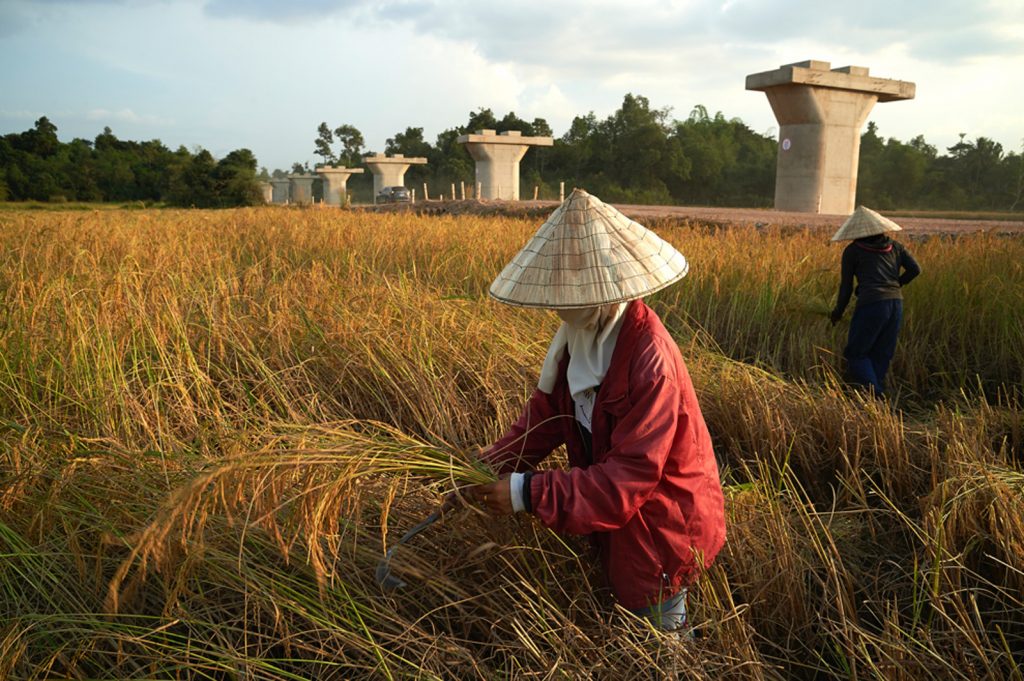 A farmer harvests her rice on the outskirts of the capital, Vientiane. The giant cement pillars looming in the background will support the Nam Khone bridge, which at 7.5 kilometres will be the longest on the China-Laos railway. The farmer has been informed that her field will soon be requisitioned. Though the government is yet to compensate her, she says she’s still excited about the project. 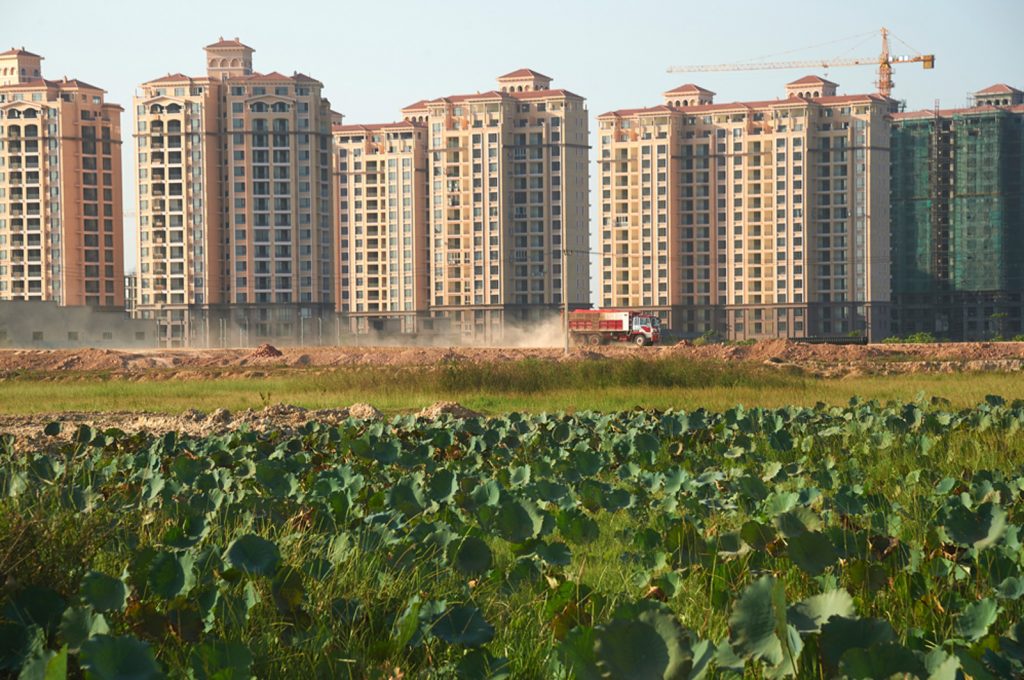 That Luang Marsh on the outskirts of Vientiane. Construction of a special economic zone here began in earnest in 2017. It has been dubbed the “Dubai of Asean” but at this point is a ghost town.

Surya Chuen is a photojournalist based in Bangkok, Thailand. He reports on the environment and development, and social changes taking place in the Mekong region.

This article was first published on chinadialogue.net.

The article "Photo story: The China-built railway cutting through Laos - The Third PoleThe Third Pole" was originally published on https://www.thethirdpole.net/en/2019/02/14/photo-story-the-china-built-railway-cutting-through-laos/ 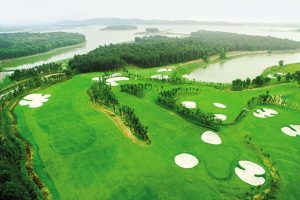 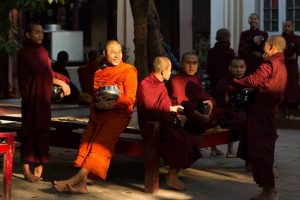 Podcast: A tale of two cities