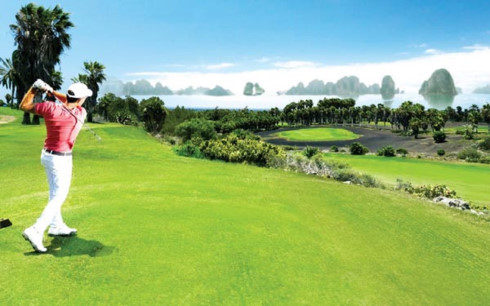 Vietnam has been named Asia Pacific’s premier golf tourism destination, an accolade that is sure to help the industry reach new heights.

The prestigious ranking was announced by Asia Pacific Golf Group this month. “Vietnam performed very well in our 2017 Asian Golf Awards online poll, garnering a great ideal of support from golfers both in the region and internationally,” revealed Mike Sebastian, chief executive officer of the Asia Pacific Golf Group, the owner of the Asian Golf Awards.

Now in its 18th year, the 2017 Asian Golf Awards online poll was conducted over a period of three months from April 1 to June 30. More than 104,000 valid votes were cast and Vietnam was the preferred choice of voters.

The award is directly attributable to the interest being shown in Vietnam’s golf industry. Golfers and the golf media are heaping praise on the country and its golf facilities.

It is hard to imagine that back in 1930, Vietnam had just one golf course, located in the highlands of Dalat. The Dalat Palace Golf Club is Vietnam’s oldest, built in 1922 by French architect Ernest Hebrard and frequented by Vietnam’s first golfer and last emperor, Bao Dai.

With the passage of time, Vietnam has begun a transformation which has spawned the now famous Ho Chi Minh Golf Trail – a collection of championship courses that run parallel to the famous Ho Chi Minh Trail, used as a supply route for the Vietnamese in their battle against American troops. It was these courses, built in the early years of the first decade of the New Millennium, that caught the attention of international golfers.

Today, Vietnam boasts a world class collection of stunning golf courses dotted along a 2,000 mile coastline stretching from Hanoi in the north to Danang in the central region and Ho Chi Minh in the south. In fact, new courses are popping up at such a frenetic pace that it can be difficult to gain an accurate reading of the number of courses currently open for play in the country.

It is estimated that there are now around 40 courses open and a number that are in various stages of construction which should be coming on stream this year and throughout 2018. Whichever way one looks at Vietnam, there is no denying that it is the new frontier for golf. It would be fair to say that there is no place on the planet that can match the pace of new course construction that is taking place in Vietnam.

These branded names have stirred attention amongst golfers in the Asian geography. The two groups of golfers who are making a bee-line for Vietnam are the South Koreans and the Japanese who arguably constitute the largest number of international golfers visiting the country, not to mention the large expatriate populations of Korean and Japanese workers in Vietnam.

Vietnam Golf Association estimates the number of domestic golfers at between 30,000 and 35,000. Given the pace of new course development in the country, and the healthy local economy, indications point to exponential growth in the number of local golfers in the coming years.

Combined with international golfers visiting Vietnam, it seems safe to conclude that the country is poised for a sustained golf boom. Further, international tourist arrivals for 2017 are projected to exceed 10 million, an increase of more than 30% over the same period last year. A percentage of this number is undoubtedly coming to the country for a golf experience.

Another indicator that golf tourism is set to grow is tourist expenditure, a good measure for golf course operators. Historical records indicate that Vietnam earned more than US$15 billion in tourism revenue in 2015 and based on preliminary data, the country is on track to earn in excess of US$17 billion in 2017.

Now that Vietnam has been crowned the top golf tourism destination in the Asia Pacific, it will likely attract more attention which will automatically convert to better financial returns for the nation’s golf clubs. Vietnam will receive the award officially during the 2017 Asian Golf Awards which will be staged in the city of Danang on November 16.

EPGA is turning heads
Tour continues to elevate its game